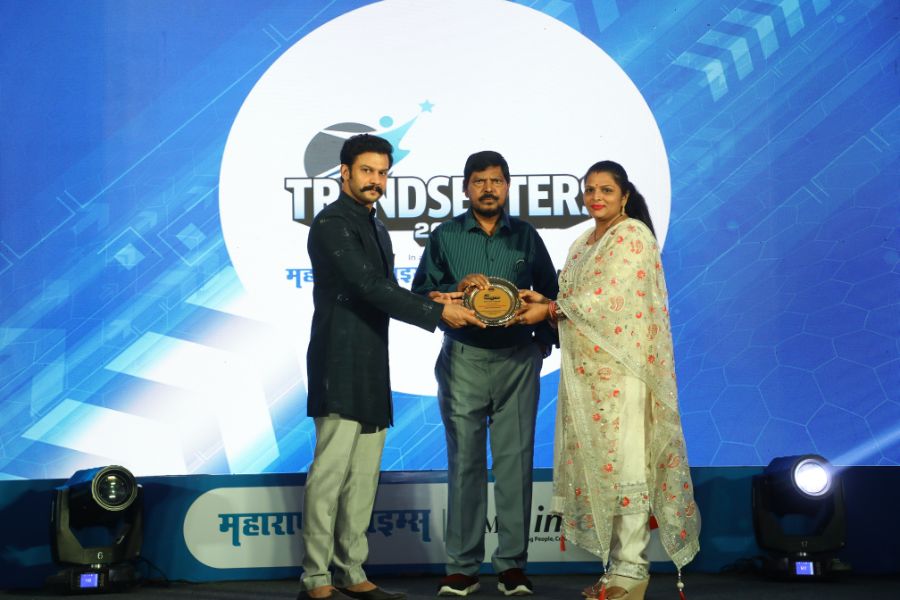 September 16: Influential female social worker Pradnya Sharma (Phopherkar), aka Pradnya Tai, was recently felicitated by Union Minister ShriRamdasAthawale at the prestigious Trendsetter 2022 Event organised in association with the most significant read Marathi daily in Mumbai –The Maharashtra Times and Times Interact. The event took place on 28th August at a 5- star Hotel in the presence of eminent entrepreneurs, professionals and social workers.

As the founder of Desire Foundation NGO, Pradnya Sharma (Phopherkar) is amongst those social workers who, along with her NGO’s team, have done path-breaking work for issues faced by women and children in particular. Right from problems related to paying equality, discrimination & harassment at work, gender disparity, free education and more.

In her address, Pradnya Sharma, the philanthropic leader who is also an advocate by profession, said she was happy to be born an Indian woman. She recalled when she had to work in houses to support her family and education as she hailed from a lower-middle-class family. She said, “It was during my college days in Mumbai University NSS unit that I developed an interest in social work and continued with it after graduation. Social work with women and children in India is challenging as the issues are multiple and complex. One has to be completely committed to people’s emotional and mental well-being.”

Pradnya Tai is among many female pioneers in social work who have made lasting changes over the year. She started her journey in the field of social work in 2005. While working for women and girls, she set up NGO & AditriBachat gats for women, where free education for girls, jobs for needy women, and business opportunity for willing women is being created. Moreover, she raised her voice against women’s physical and mental harassment in society. In the journey of working toward women and girls, from the year 2005 till the year 2015, Pradnya became Pradnya Tai.

Various prominent newspapers and organisations have appreciated and recognised the work of Pradnya Tai. Her work for Women Empowerment in Slums and remote interior parts of villages in Maharashtra-Parli, Vaitarna, Vikramgadh, Mokhada, etc., is commendable. She has made more than 500 women self-dependent and takes care of 100 Malnutrition children monthly in the remote areas of Maharashtra. She also looks after several orphanages and provides free education for children residing in the slum areas.

Her exceptional work in the field of Social Work has won her many awards and accolades, including the award for ‘Best Social Worker’ by Thane Municipal corporation by the Chief Minister of Maharashtra, Mr EknathShinde, ‘Empowering Women’s Award’ by Central Government of India at Constitution Club of India, New Delhi and the Youth Ikon Award & Women of Excellence Award by O Womania.

Presently she is the Maharashtra head of Women and Child Welfare. In addition, she is an esteemed member of the POSH committee with prominent groups in the health care segment.

Pradnya Sharma (Phopherkar) is rightfully considered a ‘Trendsetters 2022’ as she is one such eminent personality who has made it big by walking the uncharted path. The journey of Pradnya Sharma-to-Pradnya Tai is inspirational.

Dr. Deepak Singh’s Book ‘His Holiness THE DALAI LAMA and His Footstep’ Is Getting Rave Reviews*

Step into the world of Cancatia!