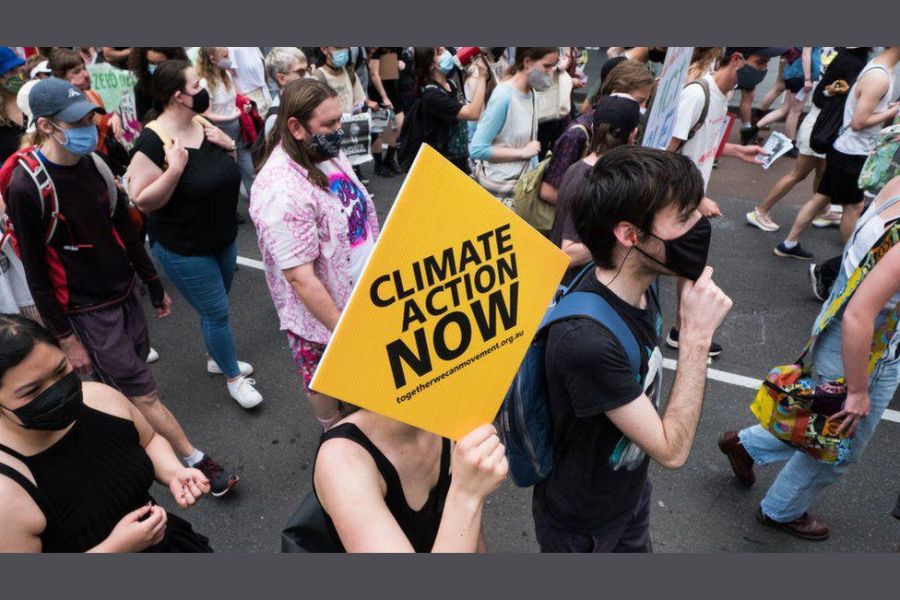 September 26: In the fight against “Climate Change” amongst leaders across the globe, the most important complication, people are facing, isto interpret the commitment toclimate action. Climate change has become a contradictory subject and therefore people are not able to understand the grim consequences of climate change. The concept of climate change is conceived differently in different regions. Henceforth, every organization is trying its own mechanism and framework to address the climate crisis. The various layouts designed in addressing the global warming issues and transform into green and sustainable development, tapping more green energy resources, the core essence of the vision is yet to be clearly decided by the stakeholders. Restoring the ecosystem is nowalk-in park after decades of human damage.  However, the crucial part of addressing the challenges of the climate change crisis is the change in our perception and behavioral ethics towards conservation and preservation of the natural world. The optimal use of natural resources would pave the way for restoring back the lost beauty of the ecosystem, but we also need to motivate society to bring the paper-plans into real action.

Practically, it’s high time to work on the action plan. In hiskeynote address, John Kerry said,“Climate Change is neither Politics, nor ideology, this is a Science”.

Speaking of which, there should beprudent digital technologies and digital transformation in converting carbon footprints into a green energy globe; in translating the commitment of Paris Agreement and eradicating pollutions using artificial Intelligence model.

According to UN, United in Science report 2021, “Carbon dioxide emissions are nowhere close to reduction targets. Greenhouse gas concentrations in the atmosphere continue at record levels, and there is no sign of the world that we are growing greener.

Thus, it is apt to mention that Covid 19 did not slow the relentless advance of climate change; rather it was only a temporary blip due to economic slowdown”.

It is crystal clear that climate change has become something bigger than the pot of science and is getting worse faster. It is a stark reality affecting the lives of all of us; it is not only affecting our present but changing the future prospects of human beings. Henceforth, there is a dire need of commitment to saving the planet and working on climate action plans.

So, what’s the faster solution? Or what’s the best judicious move towards achieving the Climate Action Plan?

According to World Meteorological Organization,a New Climate report by the top climate scientist confirms for a clarion call for immediate action to slash greenhouse gases in the face of an unprecedented and accelerating climate crisis.

Throughout the pandemic, we have been hearing that we need to build back better to set humanity on a more sustainable path and to avoid the worst impacts of climate change on society and economies. The United Nations Environment Programme while hosting conference“Digital Transformation for Environmental Sustainability”, on September 15-16, 2021, discussed with a few emerging organizations about speeding up the initiatives from different stakeholders regarding the Action plan on Climate Change and 2030 Agenda for Sustainable Development.

Digital Technologies are now playingpivotal role in bringing the concept of sustainability to“justainability”.It’s the need of the hour to spearhead the genuine construction of climate projects.

The United in Science report gives us an alarming statement that “Even with the ambitious action to slow greenhouse gas emissions, sea level will continue to rise and threaten low-lying islands and coastal populations throughout the world. In addition, in a report by BBC, states, “How Climate change causing the destruction to homes across Arctic. The findings speak the trauma of climate change where residents of Alaska are threatened by the Permafrost thaw in Kivalina. Their cracked homes, buckled roads and ruptured pipelines are some of the common side effects of rising temperatures near Arctic. Scientists claims Climate change is causing the Arctic to warm two-to-four times faster than the rest of the planet.”

In an another BBC report dated November 11, 2021, due to adverse effects of Climate Change a single Himalayan village split into two. This Indian village of Himalaya regions named that was a surrounded by snow-clad mountains is hazardously effected by global warming.  Due to vast hunks of glaciers dried up in the region, the villagers are struggling to acquire water for their day to day uses.

Several other examples could be illustrated to examine the consequences of the climate    change but the question is how and when we are going to tackle the situation. At a certain level it has become messy and people are confused to deal with the subject with adequate knowledge and bring back the earth to her green glory.

G-STIC: Global Sustainable Technology Innovation Community: Against this backdrop, G-STIC (Global Sustainable Technology and Innovation Community) is an accelerating market-ready integrated technological solution for achieving the SDGs. It is one of the emerging organizationswhich provide partnerships to organization and communities in engaging with clean and green technologies and to speed up the climate action plans.

Speaking of which, the Government of Flanders launches the G-STIC Climate Action Programme in 2021, call for proposals in the field of international climate finance. This programme provides €4,849,361 in subsidies for projects which implement and upscale climate solutions in developing countries. The goal is to enable these countries to follow low-carbon development paths and to make their communities more resilient to the impact of climate change.

GSTIC programme aspire to bring out the transformational change byutilizing the digital technologies and strengthening the implementation of developing countries’ climate policies, strategies, regulations, action plans and actions for both adaptation and mitigation to help achieve the Paris Agreement goals.

Turning climate change challenges into business opportunities is one of the key solutions provided by the G-STIC. The G-STIC Industry Night offers plenty of networking opportunities with influential policymakers, investors, and captains of industry. GSTIC Plenary Conference drives the community and business folks to pave the way for emerging and rising trends in the industry and testified how businesses can drive growth and productivity while contributing to achieving the SDGs.

Nevertheless, G-STIC conference initiated the process of developing a living library of integrated technological solutions that can substantively contribute to the achievement of the Sustainable Development Goals and climate goals.

The key lessons in the planning of accelerating the “Climate Change Action Plan”, revolve around harnessing digital technologies and new innovative methods.

An inspiring example of G-STIC and United Nations collaborative efforts could be cited here, where the use of GDM Filtration technology was installed in Indonesia and Cambodia for ensuring Sustainable water solutions.

In an effort to recover the man made damage done to the planet, Geo-engineering climate change has become a last ditch tool in the fight against climate change.  Although the potential of geo engineering is still a matter of controversy and many scientists are yet to test the positive outcomes of geo engineering methods.  But the company in the Switzerland named by “ClimeWorks” develops, builds and operates on the technology meant for carbon filtering. The idea is to bring the remedial solutions in carbon sequestration, ie. Reduce Reuse, and Recycle CO2 to curb the amount of carbon dioxide and stop global warming.Clime works with the vision of removing unavoidable carbon dioxide from the air. The technology “Direct Air Capture” machine operates on the geo engineering tech solution that absorbs the carbon dioxide from the air –captured that can be either recycled or reused as a raw material, after completely removed from the air and thereafter safely storing it.

The machine captures CO2 in two processes: Firstly the air is sapped into collector with fan and second, after the filter is fraught with Co2, the collector is closed and temperature is tuned to rise between 80- 100 C , meant for releasing the carbon dioxide .Finally the highly purified carbon dioxide is collected, the high concentration of Co2 that could be supplied as raw material to coke companies or others. The machine possesses the global capacity to consume/store carbon dioxide between 5 and 30 trillion tons with minimum removal usage of land and water and henceforth that makes it more competent.

The best part of Direct Air Capture machine is that it works on renewable energy or energy from waste.

When we are talking about lessening the loads of carbon footprint in the atmosphere, we must also understand that we need to accustom our lifestyle and switch our work to eco-friendly mode. And here’s one another example put up by “Sweden Eco Data Centre”.

EcoDataCenter is a joint venture between local energy FaluEnergi&Vatten and data centre operator Eco DCAB. It is Sweden the world’s first climate-positive data center, powered by 100% renewable energy and with digital technologies to make it as energy efficient as possible. The center has a power usage effectiveness ratio of 1.15 versus the industry average of 1.6, proving how a data centre can be both efficient and sustainable

While addressing the event, the Minister mentioned that “Greenhydrogens are an excellent clean energy vector that enables deep decarbonization of difficult-to-abate emissions from the various industries and heavy commercial transportation sector. He highlighted in his speech, A single diesel bus plying on long-distance routes typically emits 100 tons of CO2 annually and there are over a million such buses in India.Fuel Cell vehicles also give zero greenhouse gas emissions in stark contrast to diesel-powered heavy commercial vehicles which account for 12-14% CO2 and particulate emissions.

“The Minister emphasized on the fact  that India can switch from being a major exporter of fossil energy to a net exporter of clean hydrogen energy, offering worldwide leadership in the hydrogen sector by being a significant green hydrogen producer and supplier of green hydrogen equipment.”

Antonio Guterres quotes in his tweet “The World is challenged like never before, but Sustainable Development Goals still offer a roadmap to get back on track. These technology-based solutions would open new doors to the resurgence of the planet, making things healthier and more environmentally friendly.”

In conclusion, Climate Change is an international agenda and it has certainly grown as a result of emergent consciousness of the adverse consequences of climate change events taking place across the globe. The possible implications are more than we think of. The action plans are now being demanded by the public and thus, Climate action proposal like “Australia’s Climate Change Bill, which slash emissions by at least 43% by 2030, is a significant step forward by the government. “Australia’s parliament legislation enshrined a pledge to curb carbon emissions by 43% by 2030 and to net zero by 2050.The country is one of the world’s biggest emitters per capita, and the target brings it more in line with other developed countries.

While highlightingthe very agenda of the Climate bill “Prime Minister Anthony Albanese lauded the new law – the Climate Change Bill – as an end to a decade of climate policy inaction. It marks the first significant action against climate change since the party took power in May.” Following the sequence of Climate Action Plans, developed nations like Canada and the United States are also laying up their best efforts.Canada intends to cut emissions by 40% by 2030 compared to 2005 levels, while the US plans to cut emissions by up to 52%.

As Sam Ricketts, co-founder of Evergreen Action, observed and quotes , “Every agency is a climate agency now.” Ricketts’ observation captures the reality of the challenge ahead. We cannot tackl21st-century imperatives of climate change20th-century solutions.  There isa requirement for bolder actions and a whole-of-government approach are needed.

The efforts of many stakeholders and government agencies will undoubtedly draw a significant curve in tackling the issues of the climate catastrophe, but more brainstorming sessions are necessary to fulfil the agenda!

Short bio about the writer:

The writer is a freelance journalist and the Media coordinator in Vigyan Prasar, Department of Science and Technology, Govt. of India.

If you have any objection to this press release content, kindly contact pr.error.rectification[at]gmail.com to notify us. We will respond and rectify the situation in the next 24 hours